Department of Mathematics Welcomes You 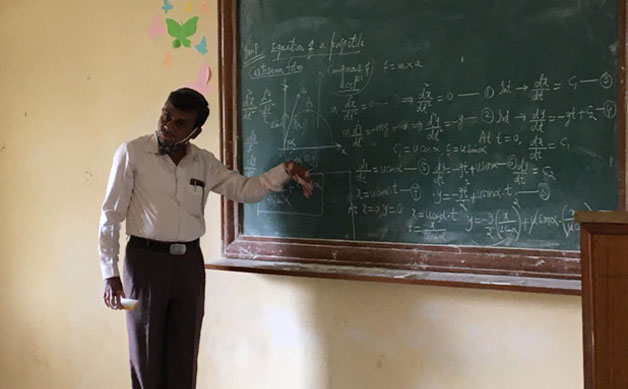 Presently the department is working with one full time faculty member and one full time on temporary basis with 29 Theory +8 practical=37  teaching hours per week. In the academic year 2020-21 the dept has a total strength 52+73+51=175 (B.sc I, II, III)

Vision of the department:

Mathematics is bound to gain greater significance with the advancement of Science and technology. L T revolution with further necessiate in strengthening the layman. In the college emphasis is bound to be one those aspect of mathematics, which have greater utilitarian Value. The dept would like to explore the new fields of application and impart education according to the changing needs of our times.

It is our mission to engage in the teaching and learning of mathematics that will challenge students to be independent learners and develop sound reasoning, problem- solving, & critical thinking skill necessary to compete in a global society.

OBJECTIVES OF THE DEPARTMENT

Mathematics is supposed to be the mother of all Science. The objective of the department and teachers concerned is to create on atmosphere with students to evolve themselves in understanding stupendously expanded knowledge in mathematics, which should help in future, career.

The department aims at imparting knowledge of mathematics, so that it will be useful in the examination and a pleasant experience in the classroom. Application of mathematics is a necessity in every walk of life. Teaching the importance of mathematics as a useful tool of calculation in science subjects to the students is also an aim of the faculty members. Conduct seminars  as selective chapters by helping them with proper existence to prepare the subject in detail.

*Plan of action of the department  for the next five years. The department has the plan to take up minor research projects.

Algebra I & calculus I

3 To understand the Idea of the indeterminate forms by using L.Hospital rule

Co 3 Concept of limit, continuous of the functions and verification of homogeneous functions by using Eulers theorem

Co 4 To understand the integration of sinx, cosx, tanx  etc.

Co 5 Gives the idea of Sphere, Cone, Cylinder and its equation.

Co 2: To learn the kinds of the sequences and their properties

C0 3: Verify the given series is convergent or divergent by using different task

Types of sets  & polynomial equation of nth degree in one variable. Solve the cubic and biquadratic eqations.

Co 2  Verify the given series is convergent or divergent by using different tests.

Co 1 To understand the concept Cauchy-Riemann integration. The properties of integrable functions

Co 2 To understand the first and second mean value theorems of integral calculus.

Co 1 Explain the various method of Algebric and transcedental equations

Dynamics and Calculus of Variation

Co 1 Gives the idea of finding the component of radial, transverse, tangential & normal velocities and accelaration of a particle

Co 3 Gains knowledge regarding projectile of a motion

Co 1 Learns the numbers like prime and composite. Concept of division algorithm and explain the fundamental theorem of arithmetic

Co 4 Learns about the calculus  of residues and contour integration

Co 1 Discuss the conditions of integrability and its solution

For all sems Practicals

Use the Scilab  lab/ Maxima open-source software to execute the practical problems.

Po 2  It is   very helpful to study for higher education

Pso 1 To understand the concept of algebra which include equations, numbers and algebraic structures

Pso 2 Students are able to understand and view mathematical structures